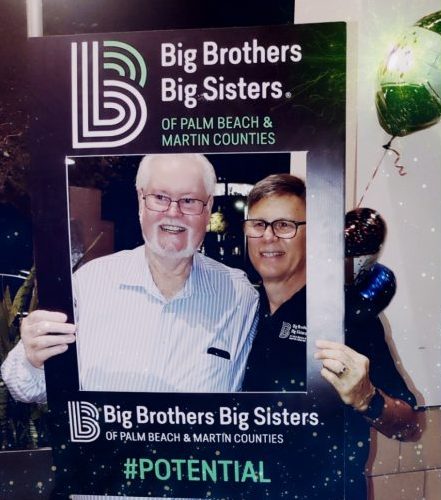 Two men who have given their time, talent, and treasure to Big Brothers Big Sisters of Palm Beach & Martin Counties (BBBS) were recently honored by the nonprofit as they retired after decades of service. Alumni Board Chairs, Board members, supporters and attended the cocktail retirement event in Palm Beach Gardens.

Bill Bee spent 18 years with the organization, during which time he was President/CEO, CEO Emeritus and advisor to senior staff and Board of Governors. And, of course, he was a beloved “Big”.

His accomplishments include guiding the expanding of services into Palm Beach while coaching the next generation of leaders for BBBS.

After retiring in 1999 from a successful career on Wall Street, he moved to Florida and found a second success while leaving his inimitable and indelible mark on BBBS.

Richard Levine, the second honoree, was a Campaign Chair at United Way of Martin County. He began volunteering for Big Brothers Big Sisters 15 years ago. During his time at BBBS, Richard served as trustee, former chair of the Board of Governors and treasurer of BBBS of Palm Beach and Martin Counties.

The retired vice president/general manager of Macy’s has continued to mentor staff in developing HR policies, marketing, branding, and planning youth shopping events with Macy’s even though he has lived in Broward County for the past nine years.

The staff, board, and volunteers of BBBS of Palm Beach & Martin Counties are grateful for their big hearts and the combined thousands of hours they gave to this organization. Thank you for your service, leadership, and guidance. We can never thank Bill and Richard enough for all they’ve done.